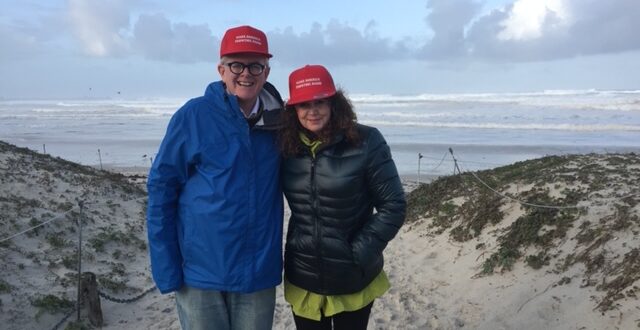 In January 2017, I met my brother John in California for a “Weekend with David Whyte.”  As a poet, Whyte helps corporations have more soul.  John and I had planned this for months as a brother-sister weekend because we realized once we hit adulthood, we had never spent any time alone. We live on opposite coasts.  When we see each other at family events, there are many other O’Gradys around, leaving no time to talk more deeply about our shared childhood, dreams, and concerns.

On the first day, we randomly sat at a big table for breakfast with a friendly guy named Eugene from South Africa.   The idea that we were brother and sister having a weekend together intrigued him.  He left inspired to ask his sister — whom he adored but rarely got to see — to take a similar trip when he returned home.

Two years later, a colleague and I were writing a book about how to put the CARE back in health care.  We brought on a third author, a nursing professor, Minette from the University of Cape Town who knew a lot about caring science.  We started monthly ZOOM calls to keep the book moving.

Last week, Minette asked if I would host a webinar on Extreme Self Care for Extreme Times to the Sub-Saharan African nations pediatric nursing faculty.   During the webinar, Minette noticed a slide I had that referred to David Whyte — so she took a screenshot and sent it to her brother, who had introduced her to Whyte’s work.

Soon she received a message to call him.  Eugene had seen my name on the slide, tracked me on-line, and made the connection between me and our January 2017 breakfast!

And so it goes, Minette and Eugene are brother and sister. By some incredible coincidence, I had met my colleague’s brother years before I met her! Inspired by my brother and I, they too had taken a trip together, theirs to Barcelona.  There are 60 million people in South Africa and 330 million in the US—how could such a surreal, extraordinary connection come to be?  You never know who will be inspired, and the strange ways good ideas are spread.   Where attention goes, energy flows!

Is there someone in your life you want to connect with more deeply?

Keeping Promises to Ourselves

The Wisdom of Hopelessness
Ride the Wave: Costa Rican Surfers and Wellbeing

The Butterfly VS the Moth
7ads6x98y