One Person’s Experience with Integrity

Comfortable shoes and the freedom to leave are the two most important things in life.
–Shell Silverstein

A colleague of mine accepted a senior clinical position at a large research hospital She quickly saw that the culture was focused on conducting research, with attention to patients as a secondary priority. When tension and irritation began to build in her. she courageously spoke up about being attentive to patients but was met with a wall of resistance. Her peers were comfortable operating in this culture. Over time, she was excluded from decision-making and she felt a growing self-doubt, un-ease, and fear mixed with a desire to be accepted.

Her inner conflict came into sharp focus when she remembered the vow she took: to first, do no harm. Her value of being caring to patients were not aligned with the culture of the institution, and she was not contributing to it. Each morning, she had to turn off huge parts of herself just to walk in the door- a very costly approach to living day after day. Later, she resigned to her own great relief.

My colleague experienced moral distress, which is a state wherein you know the right action to take but simultaneously feel constrained from carrying out that action for some reason.
I interviewed her and with hindsight, this is what she learned:

We may meet so many people along this long road,
But it is of no use,  until we finally meet ourselves.
― Mimi Novic

The Butterfly VS the Moth

Anger can Illuminate
Prioritize Your Priorities 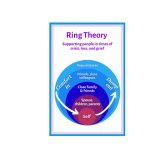 How to Talk (or not) to People in Distress
7ads6x98y